How to incorporate sensitive dialogues between the soundscape and the human body based on the relationship between art and crafts?

The singularity soundscape in the city of Granada identifies it as a territory of significant cultural, artistic and patrimonial value. The piece pays tribute to the musical heritage of this city, which is internationally renowned for its extraordinary school of guitar makers. A craft of great local tradition with important contributions to the Spanish and flamenco guitar, which has been transmitted over several generations and which has been represented historically by outstanding local musicians, contributing with a rich musical legacy.

The body as a musical instrument

The piece proposes an approximation to the city’ s soundscape by using a sound device that merges and activates with the body. In this way, the piece offers different ways of approaching the intangible heritage through the dialogue between corporeal architecture and sound.

The device has been made through artisanal processes and knowledge, applying the same techniques and materials used in the fabrication of the traditional guitar. It has been made with red Palo Santo wood, as well as with cypress wood from a historic tree that had to be removed from one of the gardens of the Alhambra.

The sound device is the result of the collaboration of Francisco Manuel Diaz, guitar maker and luthier from Granada, and Ivan Juarez, architect. A joint project that integrates the traditional craftsman’s knowledge combined with new ways of reinterpreting the traditional guitar into body-sound device.

The project took part of the cultural initiative -Encounter of artisans, artists and designers- organized by the Faculty of Fine Arts of the University of Granada and the Center Albaycin. 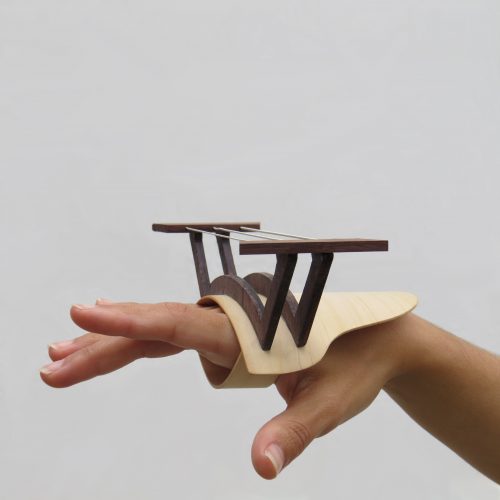